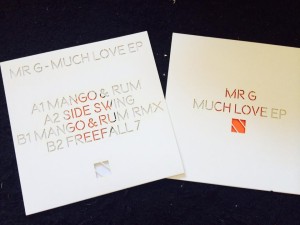 Tick tack …. Next Saturday! Record store day! TT01 is out!!
MR. G incl. Daze Maxim Remix!
Peeps! We have the 1st 100 covers of Toi Toi’s first release numbered as they are different from the rest. We decided to make them available at record shops only on Record Shop Day! Put it in your diary – 19th April!

Whoever knows of Toi Toi Musik will know they have become synonymous with underground quality and for keeping things close and personal for their events and agency. Well, with their new label it’s no different; they stay very true to their identity (a good mix of English and German) and their quality. The 1st EP is produced by the legendary Mr G. Inspired after playing live at one of their events he wrote the track ‘Toi Toi’, which was later released on D’Julz’s Bassculture label. As a consequence, his relationship with the couple is so personal he nurtured them to open their own label and offered them 3 tracks for TT01 called ‘Much Love EP’. The 4th track is a remix by ‘HelloRepeat’ co-owner Daze Maxim, who has been a guest resident for the party for nearly its entire existence.

Previous postDaze Maxim - Beginning An Ending
incl. Baby Ford Remix Next post Daze Maxim is one of the masterminds behind Hello?Repeat record label...